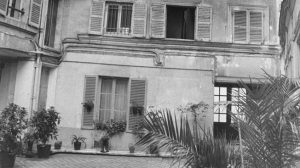 The Fédération Internationale de Football Association (FIFA) was founded in the rear of the headquarters of the Union Française de Sports Athlétiques at the Rue Saint Honoré 229 in Paris on 21 May 1904. The foundation act was signed by the authorised representatives of the following associations:
Present at that historic meeting were: Robert Guérin and André Espir (France); Louis Muhlinghaus and Max Kahn (Belgium); Ludvig Sylow (Denmark); Carl Anton Wilhelm Hirschman (Netherlands); Victor E Schneider (Switzerland). Sylow also represented the SBF while Spir performed the same function for the Madrid Football Club.
• France – Union des Sociétés Françaises de Sports Athlétiques (USFSA)
• Belgium – Union Belge des Sociétés de Sports (UBSSA)
• Denmark – Dansk Boldspil Union (DBU)
• Netherlands – Nederlandsche Voetbal Bond (NVB)
• Spain – Madrid Football Club
• Sweden – Svenska Bollspells Förbundet (SBF)
• Switzerland – Association Suisse de Football (ASF)
When the idea of founding an international football federation began taking shape in Europe, the intention of those involved was to recognise the role of the English who had founded their Football Association back in 1863. Hirschman, secretary of the Netherlands Football Association, turned to the Football Association. Its secretary, FJ Wall, did accept the proposal but progress stalled while waiting for the Executive Committee of the Football Association, the International FA Board and the associations of Scotland, Wales and Ireland to give their opinion about the matter.
Guérin, secretary of the football department of the Union des Sociétés Françaises de Sports Athlétiques and a journalist with Le Matin newspaper, did not want to wait any longer. He contacted the national associations on the continent in writing and asked them to consider the possibility of founding an umbrella organisation.
When Belgium and France met in the first official international match in Brussels on 1 May 1904, Guérin discussed the subject with his Belgian counterpart Louis Muhlinghaus. It was now definite that the English FA, under its president Lord Kinnaird, would not be participating in the foundation of an international federation. So Guérin took the opportunity and sent out invitations to the founding assembly. The process of organising the international game had begun.
The first FIFA Statutes were laid down and the following points determined: the reciprocal and exclusive recognition of the national associations represented and attending; clubs and players were forbidden to play simultaneously for different national associations; recognition by the other associations of a player’s suspension announced by an association; and the playing of matches according to the Laws of the Game of the Football Association Ltd.
Each national association had to pay an annual fee of FF50. Already then there were thoughts of staging an international competition and Article 9 stipulated that FIFA alone was entitled to take over the organisation of such an event. It was decided that these regulations would only come into force as of 1 September 1904. Moreover, the first Statutes of FIFA were only of a provisional nature, in order to simplify the acceptance of additional members. On the day of foundation, the Deutscher Fussball-Bund (German FA) sent a telegram confirming that it would adhere to these Statutes in principle.